News
GMT+2 03:56
Home News The Coalition Holds a Roundtable on the Reality of Women’s Economic Participation: Challenges and Solutions 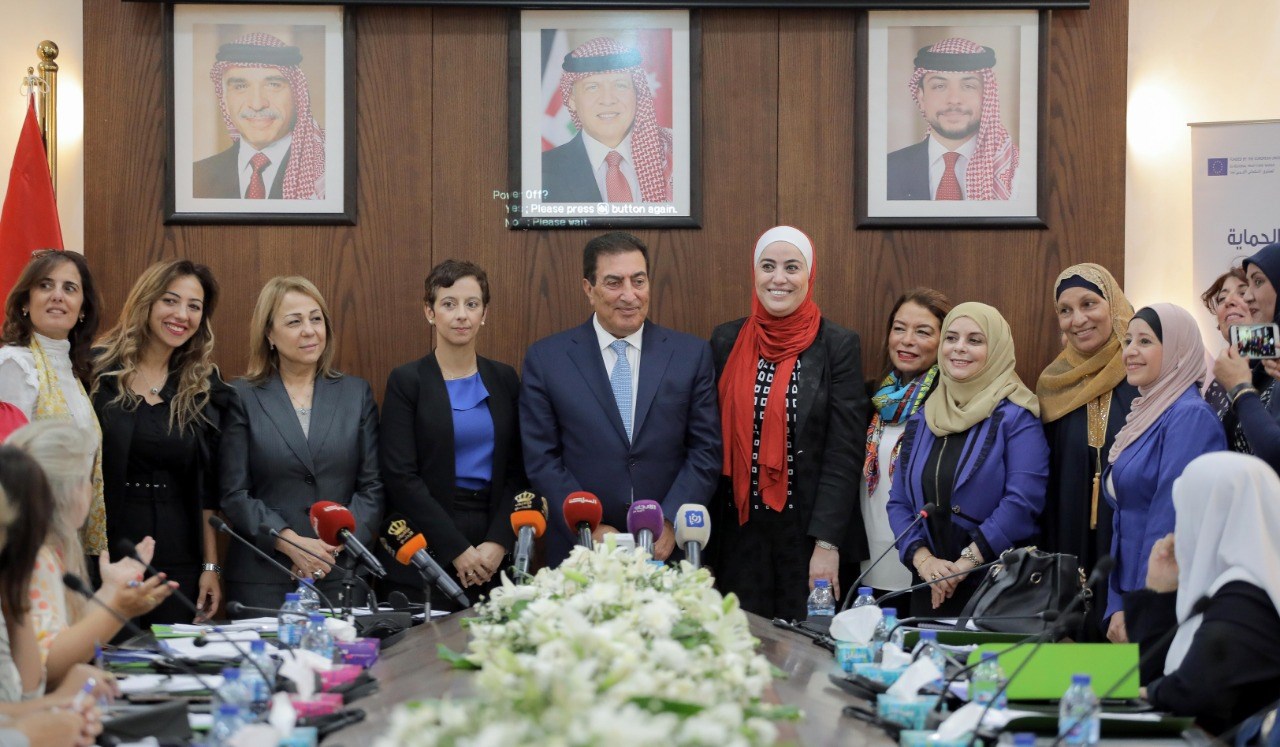 The Coalition Holds a Roundtable on the Reality of Women’s Economic Participation: Challenges and Solutions

Under the patronage of H.E. Eng. Atef Tarawneh, Speaker of the Jordanian House of Representatives, the coalition of women parliamentarians held a roundtable entitled: the reality of women’s economic participation, challenges and solutions. The slogan of the roundtable, which was held on 29 August 2019 at the Jordanian Parliament, was (Women Forward)Ms. Insaf Daas, the Director of Madad Project in Jordan at the Euro-Mediterranean Feminist Initiative, noted that since the beginning of September 2018, the Euro-Mediterranean Feminist Initiative has been undertaking a project entitled: Strengthening access to protection, participation and services for women refugees, Internally Displaced People and women in the host communities in Lebanon, Iraq and Jordan. The project is EU Funded and  came in response to the Syrian Crisis . She pointed out that the project in Jordan focuses on improving the social conditions of Syrian refugees and women in host communities and contributing to removing legal and social barriers to their employment. She stressed the need to take effective policies and steps for women to enter and stay in the labor market.Her Excellency the EU Ambassador, Maria Hadjtheodosiou, expressed her pleasure of existing at the heart of democracy represented by the Jordanian Parliament and stressed that the EU is committed to supporting civil society organizations, and is interested in strengthening the relationship between civil society organizations and the parliament. She emphasized the right of women to live in adequate conditions in the workplace, at home and in society. She regretted the lack of ways to increase support for women at work, such as the lack of nurseries in the workplace, and stressed that this would contribute to the support of women at the present time and has a significant impact in the future. She called for campaigns to change the perception regarding women’s economic contribution. She also stressed the need to support women in civil society organizations and in the media. She finally thanked His Excellency Engineer Atef Tarawneh for the achievements of the House of Representatives to promote economic participation through the latest amendments on legislation.In her speech, MP Wafa Bani Mustafa pointed out that the global statistics indicate that women’s participation is still low. She pointed out that the cost of gender inequality in the global labor market is 28 trillion US dollars, and that Jordan is ranked 140 out of 142 countries on the index of World Economic Participation of Women. She said that according to  the Department of Statistics of Jordan, the unemployment rate among females is higher than that for males, where it is 28.9 for females and 16.4 for males, saying : “The percentage is almost doubled for female”. She finally commended the efforts of civil society to highlight the obstacles in the face of women’s economic participation. From his part, Eng. Atef Tarawneh stressed that Jordan dealt with the refugee case in a humane manner while the Jordanians shared with their fellow refugees what they can share. He also stressed that Jordan did not distinguish between a citizen and a refugee, and that the Jordanians were inspired by the royal directives. On the other hand, he stressed the growing challenges on Jordan, its capabilities and resources, noting that Jordan maintained its commitment and did not force any refugee to leave the country. He pointed to the women in Gaza Strip stressing that they not only suffer from occupation, but also from difficult economic conditions, and said: “Are there women suffering more than the Palestinian women in the whole world?” He noted that the parliament has amended some legislation, including the Labor law, which now criminalizes wage discrimination for work of equal value, and defines flexible and part time jobs. He stressed that the Civil Retirement Law and Income Tax Law had been amended to benefit women. He added that according to the new amendments, women are recognized as breadwinners with regard to their tax exemption. He stressed that the House of Representatives would support any recommendation that would bring justice to women.The Secretary-General of the Higher Council for Population, Abla Amawi said that achieving greater gender equality in Jordan is a major challenge despite significant gains in women’s education and equality in educational attainment. she indicated that women’s representation is still significantly under-represented in key areas of education that promote growth such as science. She also mentioned that there are gender gaps in the labor market, where women are less likely to be paid, often earn less, and do more unpaid household chores than men.Amawi pointed out that women’s economic empowerment can be a pivotal factor in transforming opportunities resulting from economic growth into broader gender equality, as there is a growing realization that the pattern of growth is as important as it is fast-paced. She stressed that men and women must be able to participate in the benefits of growth rather than limiting themselves to competing for scarce, low-wage jobs in the shrinking labor market.