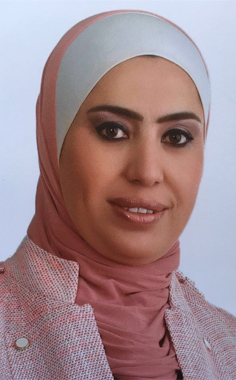 Chairperson of the Coalition

Member in the Parliament- Jordan

MP. Bani Mustafa is a lawyer and a member in the Jordanian Parliament for three terms consecutively representing Jerash governorate. She is the first woman to chair a bloc in the Jordanian Parliament. She currently chairs the Jordanian-Moroccan Brotherhood Committee in the Jordanian Parliament. She obtained her bachelor in law and her master’s in Psychological Counseling. She is the Chairperson of the Coalition of Women MPs from Arab Countries to Combat Violence against Women, which consists of 13 Arab countries. She is the Vice Chair of the IPU Standing Committee on Sustainable Development, Finance and Trade. She is a founder in Forum of Arab Parliamentarians for Population and Development. Moreover, she was selected as one of the 50 international women leaders by Women in Public Life Initiative in the USA. She occupies the position of Women Political Leaders’ Ambassador to Jordan. At the beginning of 2019, she has been chosen among 210 women leaders for her activism in human and women’s rights by Khalil Gibran Chair for Values and Peace at the University of Maryland in the USA. She is a member in the Climate Parliament, and an international observer on the legislative elections within the international missions of the National Democratic Institute where she monitored the legislative elections in Tunisia twice and the legislative elections in Lebanon in 2018. She is the Vice Chair of the Board of Trustees in Phenix Center for Economics & Informatics Studies, and she was a member in the board of trustees in the National Center for Human Rights.