News
GMT+2 09:54
Home News The Jordanian Parliament Hosts a Roundtable on Promoting the Role of Women 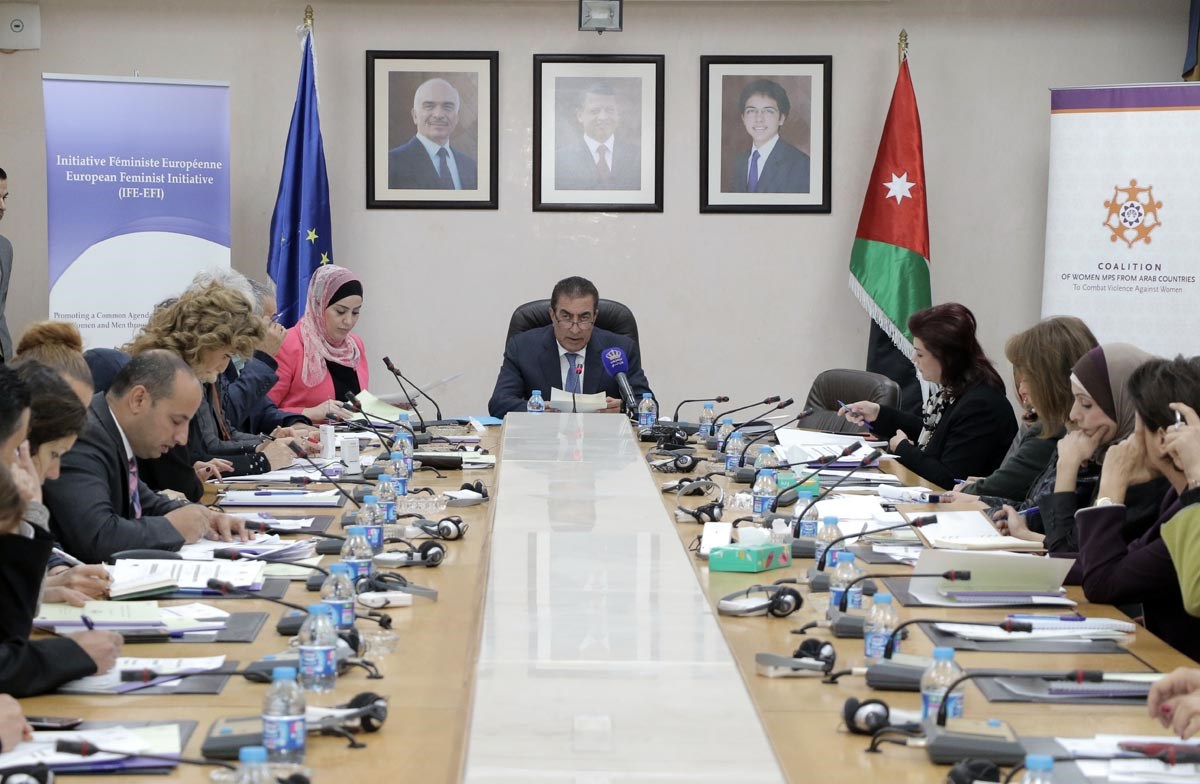 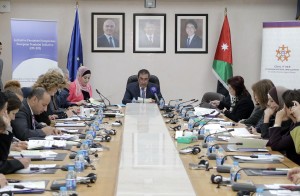 The Jordanian Parliament hosted a roundtable on the Ministerial Conclusions on Strengthening the Role of Women in Society to Gender Equality Policy Making in the Euro-Med region on March 28, 2016. The roundtable was headed by Eng. Atef Tarawneh, Speaker of the House of Representatives in Jordan. It was organized by Euro-Med Feminist Initiative in cooperation with the Coalition of Women MPs to Combat Violence against Women. The event was attended by H.E. the Ambassador of France to Jordan, David Bertolotti, and H.E. Ms. Safia Al-Suhail, the Ambassador of Iraq to Jordan. The roundtable included a number of women activists in women affairs including Ms. Abla Abu Ilbeh, Secretary General of the Jordanian People’s Democratic Party (HASHD), Dr. Salma Nims, Secretary General of the Jordanian National Commission for Women, Laila Nafaa, representative of the Arab Women Organization, and Dr. Wafa Al-Khadra, a Professor at the American University of Madaba.

During the opening session, Eng. Tarawneh pointed to the fact that women were able to prove themselves rapidly with persistence and determination, and that Jordanian women can be a perfect model for Arabs which makes them partners and rivals for men in different fields, and the proof for this, he mentioned, is witnessing women occupying positions of change and development and what they have achieved as MPs, senators, Housewives, and a workers. He pointed to the experience of women MPs, who had to face a war to prove that women are active members in decision making and never subordinates. “As for promoting their status, our country’s ambition is that women participation in the parliament become on the basis of competition and canceling the quota principle.” Eng. Tarawneh added commenting that Jordan should cancel the quota system as a civilized country. “Women deserve obtaining support for their advancement to abolish discrimination between them and their men partners.” He then invited women commissions to unite to change all the legislations that discriminate against women and lobby to modify them.

Lilian French, Co-President of the Euro-Med Feminist Initiative (EFI) asserted that the relationship between the EFI and the Coalition of Women MPs to combat Violence against Women is a strong one, and she pointed to the importance of communicating with civil society organizations and that women do not look for privileges, but they look forward to achieve social justice. She expressed her hope of working with enthusiasm because development needs the support of decision makers.

MP Wafa Bani Mustafa, the Chairperson of the Coalition of Women MPs to Combat Violence against Women, considered the study that was conducted by Dr. Wafa Al-Khadra in cooperation with the EFI, regarding the Euro-Med Ministerial Conclusions Impact on promoting the role of women, as a an important Jordanian document and a primary and necessary reference in facts and figures regarding the advancement of women role in the society. She hoped that a plan could be put to bridge the gender gap depending on the said study, because this study, discussed frankly the challenges, and regional and external barriers. MP Wafa pointed to the fact that we have a national duty and that is abolishing all forms of discrimination in legislations. She asserted that we should not support and demand for woemn’s rights only but we should translate those demands into actions and legislative and legal codes. She pointed out to the continuous thrive of women MPs in the coalition, which is located in the Jordanian Parliament, to modify article 308 in the penal code that allows sexual assault perpetrators to escape punishment if they marry their victims. She pointed to the efforts of MP Gilbert Zwein in the Lebanese Parliament in modifying the same article in the Lebanese code. She also praised MP Intisar El-Jabbouri’s efforts in lobbying and fighting for women’s rights. MP Bani Mustafa mentioned in brief the challenges that faced women in the light of the said study including: regional challenges, and the aggravation of the refugees’ crisis in the region, which has women as its first victim. She pointed that there should be a religious discourse that enforces achieving justice for women, because women returned to sex slave markets and captivity era in the name of religion. She ended saying: “There can never be a society that can achieve sustainable development unless there is powerful women participation.”

Dr. Salma Nims, the Secretary General of the Jordanian National Commission blamed the parliament because it does not take women’s rights seriously saying: “There is no political will towards the advancement of women’s rights inside or outside the parliament.” She mentioned the list of demands that the commission submit to the parliament yearly, so it can work within these demands regarding the modification of the legislations that discriminates against women, including article 308 of penal code and the domestic violence protection bill, which is still suspended. Dr. Nims said: “Legislation is an important tool for change specially changing the societal and cultural believes that participates in stereotyping the role and status of women.”

The Chairperson of Women’s Committee at the Jordanian Parliament, Dr. Reem Abu Dalbouh, wondered regarding the possibility of taking the ministerial conclusions as a reference for national policies, adding that the parliamentarians play an integral role in following up with applying these conclusions in national legislations in cooperation with civil society organizations.
Abla Abu Ilbeh, a partisan activist, pointed to the fact that women’s rights issue is a societal and political issue and that it is a national cause, and since it is a national cause it entails commitments. She added saying that there is a societal and cultural collusion and there should be channels employed to face these discriminating cultures, pointing out to the fact that this mission is getting harder after the Arab revolutions which has been followed by sectarian conflicts. Such conflicts, she commented, are definitely against women. She ended saying: “we should keep the positive and peaceful lobbying to activate the role of the three authorities: the executive, the legislative and civil society organizations.”

In his turn, David Bertolotti, the Ambassador of France to Jordan, declared that France believes that there is so much to be done to empower women and that France is committed to enhance the status of women in Jordan, and he pointed to the fact that there are so many indicators that indicates that it can be improved. He expressed his belief and his country’s belief that improving women’s status promotes development. He pointed to the fact that where there is an effective participation of women in economics, there is an improved economy. He also expressed his regrets that number of women participating in the diplomatic field is not enough. He admired the presence of the representatives of the Jordanian Parliaments in the roundtable meeting, which means that Jordan is interested in promoting the status of women. He mentioned that at the European level, they are actively working on placing the protection of women during armed conflicts on the top of their priorities and that France is ready to offer assistance to women in Jordan and that there are financial aids allocated for that specially for Alza’tari Refugee camp.
H.E. Ms. Safia Al-Suhail, the Ambassador of Iraq to Jordan, asserted the importance of the commitment of governments in activating the United Nation’s resolution 1325 in their national plans, pointing to the fact that Iraq was one of the leading countries in preparing for such plans. she expressed her admiration of women working in the diplomatic sector and in taking part in peace and security. She pointed that putting plans is important and what is more important is empowerment. She pointed to that fact that women should move and face the terrorist ideology as they participated in what is called sexual Jihad, and this way it helped ISIS with its extremist ideology. She requested for the allocation of aids from the European Union that focuses on bridging the gap of what wars left. She asserted on the necessity of developing the role of women in the diplomatic field. She pointed to the challenges that face Iraqi women and yet they can give the nationality to their children.
The Representative of the Arab Women Organization, Ms. Laila Nafaa considered the preparation for a national plan to activate the UN’s resolution 1325 should be one of the national priorities, in addition to purifying the Jordanian legislations from discrimination against women. She added that we should hold this document and use it as a tool to reach and enforce our historic demand to cancel the gap between signing documents and applying what is written inside them.
The roundtable included thorough discussions of another roundtable event held in cooperation with the Ministry of Social Development, which revealed according to Mr. Ahamd Abu Haider, Director of Political and Strategies Directorate at the Ministry of Social Development, that the most important challenges facing women are: the refugees crisis that causes the spread of violence, child labor, human trafficking, and early marriage. In addition to the increasing violence created by the extremists that weakened the concept of gender equality and women’s rights.
The researcher who conducted the study entitled: The Ministerial Conclusions Paris 2013 on Strengthening the Role of Women in Society: Impact in Jordan, Dr. Wafa Al-Khadra, focused on the most important challenges that face women’s advancement, including, as the study indicated, school curricula, which stereotype the role of women. Another challenge that the study indicated is the gap between the capital and other governorates in Jordan regarding the awareness of women rights. She criticized the weakness of coordination between civil society organizations. She also pointed to the contradictions and dualities in the society. For example, women education increased but her economic participation is still weak in Jordan, and when the national security is on high alert, the attention to women regresses. She pointed that equality can be achieved by the equality between rights and duties, and that we need to reread the roles of the three authorities and how to activate positive partnership among them. She added that we need to restudy our roles and build new roles, because as the study indicates, there is a positive change in the last ten years.