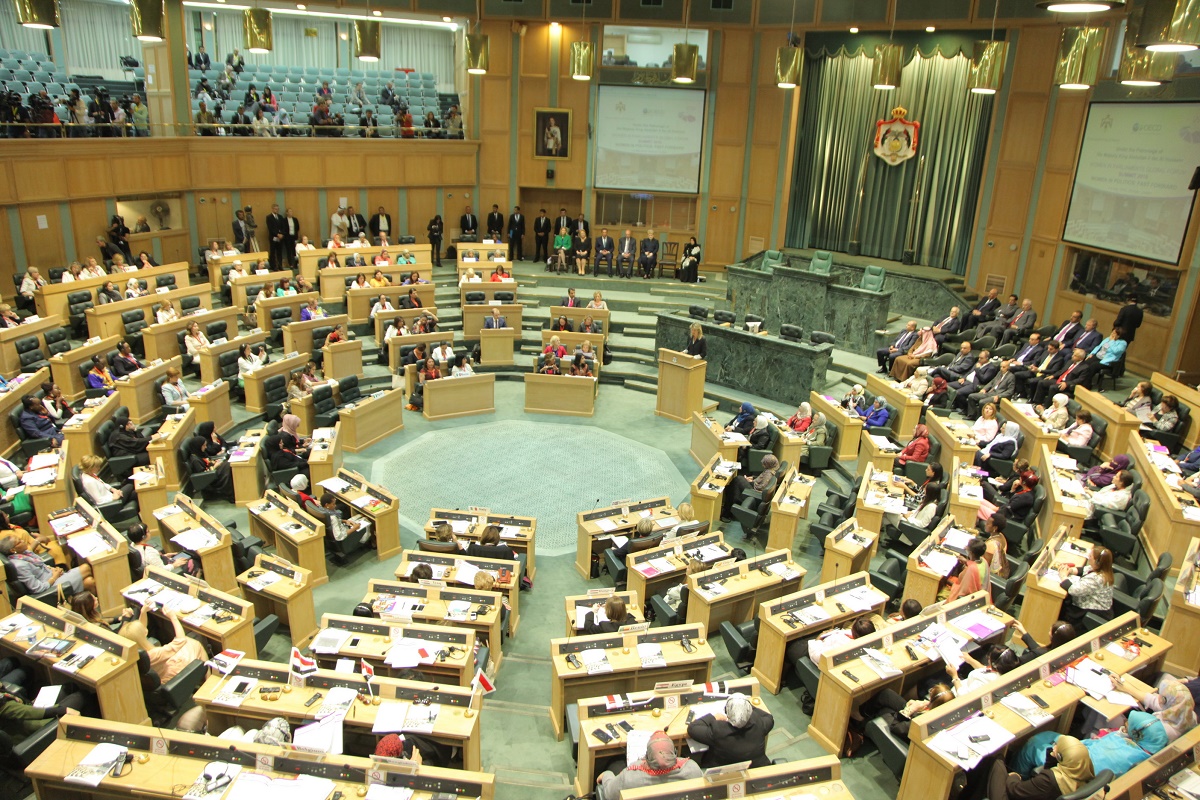 Posted By: Samia Smadion: May 06, 2016In: News, Activities
Print Email 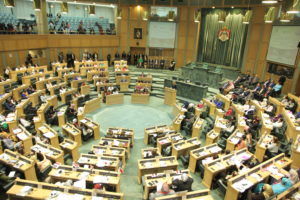 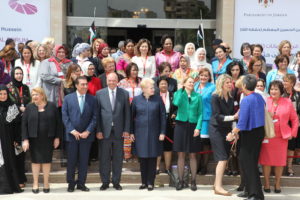 The Jordanian Parliament in cooperation with the Organization for Economic Cooperation and Development (OECD), the Jordanian National Commission for Women (JNCW) and the Council of Women World Leaders (CWWL)hosted the Women in Parliaments Global Forum Summit 2016 entitled: (Women in Politics: Fast Forward). The event took place from 4-6 May, 2016. The summit was attended by women parliamentarians from 89 countries to discuss pressing global challenges and to take part in the political dialogue that reflects the influence and worldwide perspectives of today’s women decision makers. 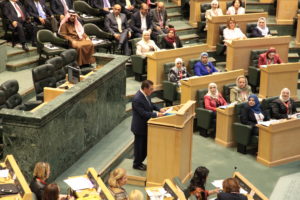 The opening ceremony included a speech for Eng. Atef Tarawneh, Speaker of the Jordanian House of Representatives, who stressed the idea that the forum is an opportunity for the participants to discuss the influence of women Mps in decision making in their homeland. As for the Jordanian Women, he stressed the fact that the Jordanian Women have engaged in the political life until they became senators and MPs since the beginning of this millennium, and that with the support of King Abdullah II, women had obtained a high status in deeds rather than in words. He pointed to the efforts of HRH Princess Basma bint Tallal in granting women a leading role. HE also pointed to the fact that Jordan will always be the Compass of peace and will not allow division on the basis of color, religion, race, and gender, and that Jordan is for everybody, and no one can be tyrannized or marginalized on its land. He pointed to the fact that Jordan is considered a model in the region, and that it continues working on reform, and that it would have been competing with the best democracies in the world, should the region had not witnessed wars. He added that Jordan continues its challenge in changing the mentality of the society, and it believes in promoting the status of women to enable them occupy advanced positions in political parties, secretariat general, and media, and thus Jordan can be “the capital of working women on its own merits.” 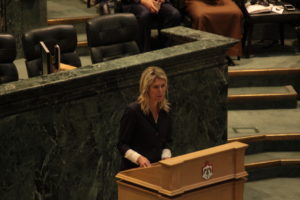 Silvana Koch-Mehrin, the Founder of the Women in Parliaments (WIP) and vice president of the European Parliament said that “the forum is a big dream and a beautiful one” and that the summit forms an opportunity to exchange experiences and achieve equal participation for women, which is considered an integral part of human rights, a cornerstone for democracy, and a logical need for the benefit of the whole society, pointing to the fact that men are still forming 80% of MP positions and 95% of the world leaders. 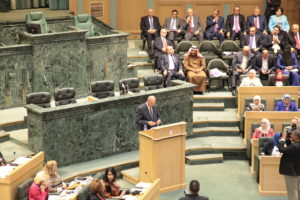 Dalia Grybauskaite, President of Lithuania, and Chair of the Council of Women World Leaders, stressed on the fact that though the terrorist groups use modern technology to fight women, this same technology can be harnessed to empower women, and that the social networks can promote women’s role. She ended saying that women can reach political positions with determination.

Dr. Amal Al- Qubaisi, Speaker of the Federal National Council, UAE, valued the role of Jordan in hosting this forum, which means that Jordan is serious regarding empowering women. She also pointed to the achievements of the Arab Women specially, women from the UAE, due to the political will, and people’s conviction, concerning women’s advancement and promoting their participation. 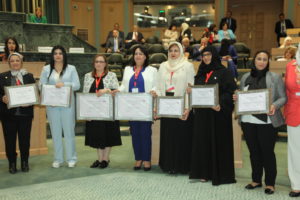 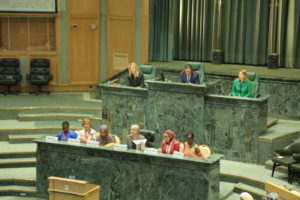 Faisal Al- Fayez, president of the Senate, assured that Jordan looks forward towards promoting the participation of women and empowering them in the MENA Region. It also looks forward to encourage the constitutional separation of powers, and to reform the laws that protect women and children with special needs. He also pointed to the fact that Jordan is blessed with peace and stability, and is respected by the international community. He pointed to the fact that terrorism and extremism threat humanity saying: “We in Jordan confirm that the war on terrorism is our war, and getting rid of it is the responsibility of the international community” Jordan will continue working towards achieving stability and peace in the region. He also referred to a quote by His Majesty King Abdullah II in which he said that without solving the Palestinian issue, conflicts cannot be abolished, and abolishing terrorism can be difficult because the Palestinian issue is the key for solving all the conflicts in the region.
He pointed out that empowering women requires developing the legislation of the bills of the parliaments, central elections, and political parties, so they can occupy important positions like: ministers, legislators, judges, ambassadresses, and MPs. He stressed on the fact that the Middle East region is living a political crisis since 1948 and now it receives a million and a half refugees, “conflicts affect women directly, which makes women issues a challenge for the sustainable development plan of 2030.He stressed the fact that Jordan is one of the leading countries in receiving refugees, and to this effect he asked the international community to bear the responsibility and offer the support concerning the refuges.
Al- Fayez then received, on behalf of His Majesty King Abdullah II, the WIP certificate of recognition for (Enhancement of Women’s Role in the Decision-Making Process.) Dr. Amal Qubaisi, Speaker of the Federal National Council in the UAE, also received, on behalf of UAE, the WIP certificate of recognition granted for (Advancing Women in Parliamentary Positions-First Female Speaker.) and on behalf of Algeria, Mounia Meslem, Minister of National Solidarity, Family and the Status of Women, received the WIP certificate of recognition for (Legislative Reform: 50% Quota for Women on Political Party Lists.) WIP certificates of recognition were also granted to many countries in the MENA region including Tunisia, due to the status of the Tunisian Women in the society, and the role they play in different fields. This was followed by a group photo for all the participants in the forum.
MP Wafa Bani Mustafa, The Chairman of the Coalition of Women MPs to Combat Violence against Women, participated in the session: “ Women in Politics: Fast Forward) This session focused on the need for gender-balanced leadership, and showcased the positive impact that parity of power has on all of the society. MP Bani Mustafa inquired: “Why women in Politics?” The reason, she answered, is that we are now witnessing what the current governance is doing and what the masculine hegemony is doing in the political life in all countries, which led to part of the disastrous results that some countries reached to. This being said, she added, women can bring different values than those brought by men. She pointed out to the fact that there is advancement in the women status in the field of education and health but this is not the case in economy and politics. Women were able to bridge the gaps in the field of education and health, whereas in economy and politics, she couldn’t. She pointed out to the fact that what women has attained today is due to the struggle of our ancestor women, whom surpassed many obstacles, and that what is requested today is to continue their achievements. She continued with her concern that we are in desperate need to develop laws and support women, and that we need to work on culture and education, because education is very important. She ended saying that we are still unable to compete with the world in politics, and that we need to exert more efforts and quickly. 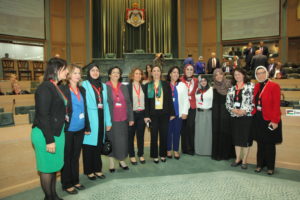