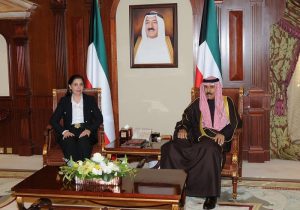 Dashti, a leading Kuwaiti economist and long-time champion of women’s rights and gender equality, is currently serving as a member of the Supreme Planning Council in Kuwait. From 2012 to 2014, she was minister for planning and development and minister of state for parliamentary affairs. Dashti played a pivotal role in advocating for the decree to allow Kuwaiti women to vote and run for parliamentary elections, and in May 2009, she along with three other women became the first women to be elected to Kuwait’s parliament.

She has also held key positions in research and development institutions such as the Kuwait Institute for Scientific Research and worked for major local and international financial and development institutions such as the National Bank of Kuwait and the World Bank. Dashti holds a doctorate degree in population dynamics from Johns Hopkins University-Baltimore, a master’s degree in economics and finance from California State University-Sacramento, and a bachelor of science in agriculture economics from California State University-Chico.

HH the Amir earlier addressed a cable of congratulations to Dashti on her appointment. The Amir, in the cable, said he was proud that a Kuwaiti citizen earned this prestigious post, noting that her appointment to the senior position also signaled the high status enjoyed by Kuwait in Arab, regional and international quarters. HH the Crown Prince and HH the Prime Minister Sheikh Jaber Al-Mubarak Al-Hamad Al-Sabah sent similar cables to Dashti.

National Assembly Speaker Marzouq Al-Ghanem also cabled Dashti, expressing congratulations on her appointment as ESCWA chief. He affirmed that naming Dashti to this senior post reflected the high-level status of Kuwait at the international level and significant potentials of national cadres in general. – KUNA