Capacity Development in Estimating the Cost of Violence against Women

Posted By: Samia Smadion: March 27, 2019In: News, Activities, The Coalition in the Media
Print Email 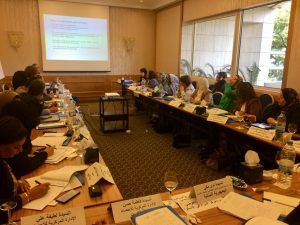 The Coalition of Women Parliamentarians, in collaboration with ESCWA and the Westminster Foundation for Democracy, organized a workshop on (Capacity Development in Estimating the Cost of Violence against Women). Ms. Mehrenaz Al-Awadi, Director of the ESCWA Center for Women spoke at the opening session.She noted that there were 60 studies conducted on the cost of violence against women that led to conclusions on how to deal with this phenomenon and provided suggestions for change. She stressed that these results do not end there, but must be applied and followed up. She also expressed appreciation for the presence of women parliamentarians in the workshop, and said: “For change to take place at the national level, policymakers must be present.”
Dr. Dina Melhem said that the Westminster Foundation is proud of many achievements in cooperation with the coalition of Arab women parliamentarians to combat violence against women at the regional level in terms of supporting the amendment of a number of discriminatory laws against women in a number of Arab countries, in addition to the drafting of an agreement in cooperation with the League of Arab States. Dr. Melhem also mentioned the report that is being prepared with the coalition on the reality of violence against women, which deals with several themes, including the marriage of minors, violence against disabled women, gentile mutilation, and harassment in the workplace.